Recently I was given free passes to Schlitterbahn in New Bruanfels, Texas. I had never been there, but my husband was there many years ago. We were going to go back in May before my 11 year old left for the summer, but Texas had rain 24 out of the 31 days that month. So, you can imagine what our roads were like! I honestly thought I would we have to start using a boat to leave and return home. Anyway, we weren't able to get out of DFW for awhile after all that rain..therefore delaying our trip to Schlitterbahn.
Last week we had decided that we would go Friday(26, June). We had my two younger girls(5 and almost 4) so excited. We spent some time on the Schlitterbahn website, and on youtube looking to see what slides we wanted to go on, and which ones my girls could go on. My 5 year old was SO adamant about going on Dragon's Revenge. I thought the height requirement was 48 inches, so we tried to prepare her that she may not have been able to go on it(she's right at 48 inches), but after looking at the website again I saw that the height requirement was 42 inches and not 48...so we told her that we would go and let her ride it even if we had to wait a long time. My husband and I agreed that even if one of us were to do that slide with her just once and then did kiddie pools and the lazy river with my younger daughter it would make the trip from DFW down to New Braunfels worth it.
We left on Friday morning(9am-ish) and from the start we had traffic issues before we even left the DFW area. A simple trip that usually takes a couple of ours seems to take forever due to all of the stopping with the littles. We drove for 5.5 or 6 hrs and were able to get about 60 miles away when there was a really bad accident that stopped traffic. Our maps said traffic would be like that for 3.5-4 hrs. It was already 2:30-3ish so we decided that we wouldn't waste the free passes for the maybe 1hr that we would be able to be inside of the park, so we turned around when we could and drove alllll the way back home, ate supper and then went to bed when we got home.
My 5 yr old was so sad, because she had her heart set on going that day, we all did honestly. On Saturday, my husband and I woke up at 5:45 so we could check the weather and get the car loaded before getting the girls up, fed, and dressed to go. We saw that New Braunfels was supposed to get a bunch of rain, so we delayed leaving because we were trying to decide if we wanted to chance going down there or not. At 6:45 I decided to call their 800# to ask what happens when they get rain. The guy that I spoke to said that they don't shutdown the park for rain. They will however, make everyone get out of the water & take cover if there is lightening around the area and if after 30 mins the lightening goes away they let everyone back in the water, so we decided to go ahead and go. We didn't leave until about 7:15am.
We didn't have as much traffic issues as we did on Friday. We ended up getting to the park around 1:30-2pm-ish. We had to park a few blocks away from the park(another reason I wanted to be there super early). Once we were parked and had our bag..we were ready to walk to the ticket counter. One of the guys that was directing traffic told us to go to "The Original Schlitterbahn"(AKA Schlitterbahn West) because the lines were shorter and it was the same price. He didn't know we had free passes. We went the way he said to go because we just wanted to get into the water. We didn't have to wait that long in line. After I went up to the correct counter we were given our bracelets and someone helped us put them on our arms, from there we went into the gift shop because we needed a waterproof camera. I was a bit shocked at the price of the camera, but I had no choice but to pay $18(it was $17 & change). Once we had the camera we went over to the locker rentals and rented a locker for our shoes, phones, glasses and bag. Lockers are $10, & when you return the key you either get $2 back or a Schlitterbahn souvenir cup. Refills w/ this cup are only $0.99! We chose to get the cup.
{Our Schlitterbahn cup} 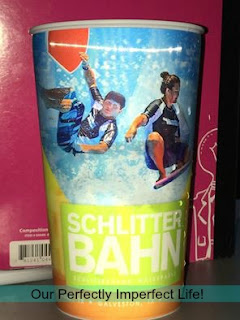 Once we had our locker and I was changed for swimming we locked our things away and started walking. We soon realized after looking at the map that we were in the wrong park & to get to where Dragon's Revenge was at it would be a 45 min shuttle ride, in the end we decided to just stay in the park we were in and find something to do. Neither one of us wanted to break the news to my daughter, but we did & she was upset...but we wanted to go on the "Congo River Expedition"(lazy river), my husband and I had our tubes and we were in line. We had been in line for about 15 mins before someone near us let us know that they won't allow children to sit in your lap and ride. Boo!!! So, we got OUT of line and went into the heated pool instead. We stayed in the pool for about 10-15 mins and then got out to walk around and see what else was in the area.
We found one kiddie areas, "Tadpole kiddie pool", and decided we would play there for a bit. My girls had so much fun! There are a few smaller slides for the kids to go on. I was surprised my 3 year old wanted to go on a slide, and was even more shocked when she said she wanted to do it alone. The slide looked like a giant toad and the actual slide portion was his tongue! it was so cute. Of course being the mama bear that I am, I was right at the bottom ready to catch her as soon as she go to the bottom. She had so much fun. Both my 5 & 3 year old are a bit cautious of pools and such and last year we went to a water park in the DFW area and they were so scared and didn't enjoy it, but this year was so much better! They were a little scared at first, but once they found out they could stand up in the water(is was like 2-3 ft of water) they were okay, and wanted to be little daredevil waterbugs.
After we left the tadpole kiddie pool, we walked some more. I wanted to do the "Raging River Tube Chute", 45-minute float from one end of the original section of the park to the other! I was super excited about that, but again...little kids have to be in their own tubes, & you can get tubes with the bottoms in them at guest relations. I didn't want to go on the ride alone, so we just went to another kiddie pool(I can't remember the name). Before we left we
went to "The Beach Wave Pool". The girls were having fun playing while my husband and I sat in a shallow part and watched them. My 5 year old ended up scraping her knee pretty badly so we took that as our cue to get out and head back to the car.
Even though things didn't go as planned, we still had a lot of fun! It was just fun for me to watch my babies play and have a good time. After we were changed and back in the car we decided that we were hungry! I just happened to have a free coupon for chipotle! 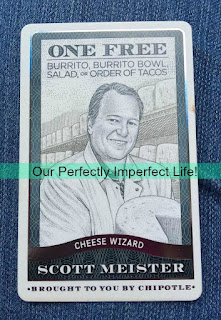 All in all we had a wonderful time at Schlitterbahn in New Braunfels, Texas! I just wish they allowed small children to ride in the tube with their parents, at least on some of them. I can understand the "Raging River Tube Chute" being 1 person per tube, but with the others you should be able to hold your child in the tube with you.
We are planning on purchasing season passes for next year, that way we can go every other weekend! :-D
*Disclaimer*
I was given free passes for myself and my family in exchange for my honest review. I am not required to write a positive review. All opinions expressed are 100% my own.
Leave a Comment
submit a review Join our blog team
More Reviews of Schlitterbahn Waterpark and Resort New Braunfels

Proud Member of The US Family Guide Network